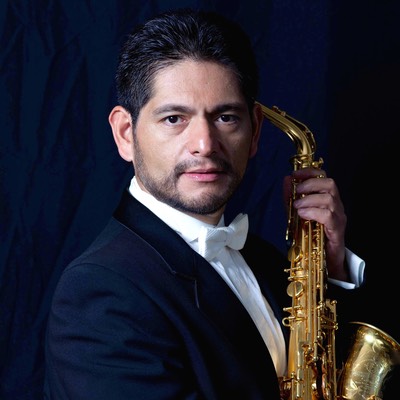 One of the brightest soloists of the classical saxophone world, Javier Oviedo is acclaimed for his lustrous tone, passionate musicianship, and formidable technique. He works tirelessly to present the saxophone as a unique, versatile, exciting classical instrument. His continuing research has helped introduce the rich tradition of musical composition for the entire saxophone family. Along with these older works, he has commissioned and premiered a dozen new pieces, both in the United States and abroad. He is especially prized for his eclectic programs, which have such unusual combinations as transcriptions of older masters such as Bach and Debussy, the music of 20th Century masters such as Elliot Carter, Paul Hindemith, and John Corigliano, and new pieces written expressly for him. As well, Mr. Oviedo enjoys collaborations with artists of other disciplines, in stage works and mixed-media programs, exploring performance opportunities beyond traditional concerts. Javier has performed to great praise in many cities across the country and around the world, from China to Latin American to many cities in Eastern and Western Europe, including Paris, Barcelona, the Republic of Moldova, and in the Russian Federation. He has appeared with the New Jersey Symphony, the Austin Symphony, the Chattanooga Symphony, L’Orchestre Lamoureux, L’Orchestre à cordes d’Ariège in France, and both National Philharmonics of Moldova and Russia in Oryol. An accomplished chamber musician, Mr. Oviedo has performed on some of the world’s most prestigious stages, including Carnegie Hall, Lincoln Center, Salle Cortot, and The United Nations.
His debut recording, The Classical Saxophone: A French Love Story, featured original music for saxophone and orchestra from the 19th and 20th Centuries. The disc received high praise by industry critics and the public at large. The CD was recorded in Paris with the Orchestre Pasdeloup under the direction of Jean-Pierre Schmitt. In 2014 he released two new recordings. And So It Begins…, which features chamber music by New York composer Debra Kaye, highlighted his playing on two tracks. Lazy Afternoon: Salon Music for Classical Saxophone of Byron Bellows, recorded with St. Luke’s Chamber Ensemble and lead by Maestro Jean-Pierre Schmitt, consisted of material written especially for him. All these recordings are available on Amazon, iTunes, and via Pandora Internet Radio.
Mr. Oviedo is a founding member and Executive Director of The Classical Saxophone Project (CSP) (classicalsaxproject.org), a natural extension of his research and performances. An important mandate of CSP is continuing education, where he works with students of all ages to keep classical music, and the saxophone, vital parts of the music world.