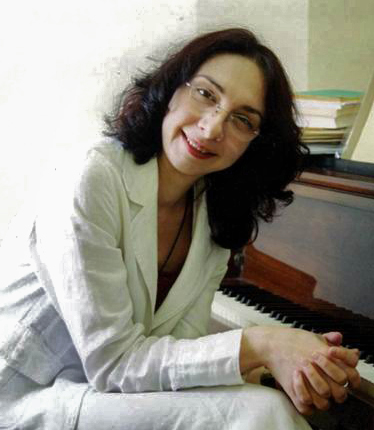 Nino Barkalaia has graduated with an excellent mark from Moscow P. Tchaikovsky State Conservatory Faculties of Piano, Organ and Music Studies. She holds the Literature and Art Award of France (2002). She is doctor of Esthetics, Music Studies and Philosophy for University Paris-8; She is an Associated Professor for Moscow P. I. Tchaikovsky Conservatory. She performs a wide concert repertoire of classic and contemporary music. Nino has temporary engagements in various countries, reads lectures and holds master classes at European Universities and Conservatories. She has been cooperating with musicians: Olga Kaizer - Harp, Pierre-Yves Artaud – Flute, Sili Gazo – fiddle, and composers – Gi Rebel, Michael Levine, Bernat Vivancos, Oscar Strastnoi and others. As a soloist-pianist she performs concerts in Austria, Germany, France, Slovakia, Poland, Czech Republic, Russia, Jordan and other countries. She has recorded for radio, television and CDs, including the first recoding was a full collection of composer Nikolai Obukhov for piano. She has taken part in the following festivals: Moscow Autumn, O. Messiaen Remembrance Festival (Moscow), Festival Trier (Germany), D. Shostakovich Remembrance Festival (Paris, France, 2006), Festival in Montpellier, and so on. She has conducted academic research in field of various composers and has popularized their art; in 2007 she was an author of radio program and diaries at Radio De France; she is an author of program (Performance by Classic Authors jointly with Mikheil Voskresenski) and creator at Culture TV channel (2011-2013); Nino is a constant participant of various international scientific conferences; Nino is an author of about 60 articles in Russian and French languages.

Since 2005 she has been giving lectures at Moscow Conservatory faculties for piano and orchestra. Since 2014, as a presenter and acting pianist, she leads author course at the conservatory in the form of lecture-concerts.