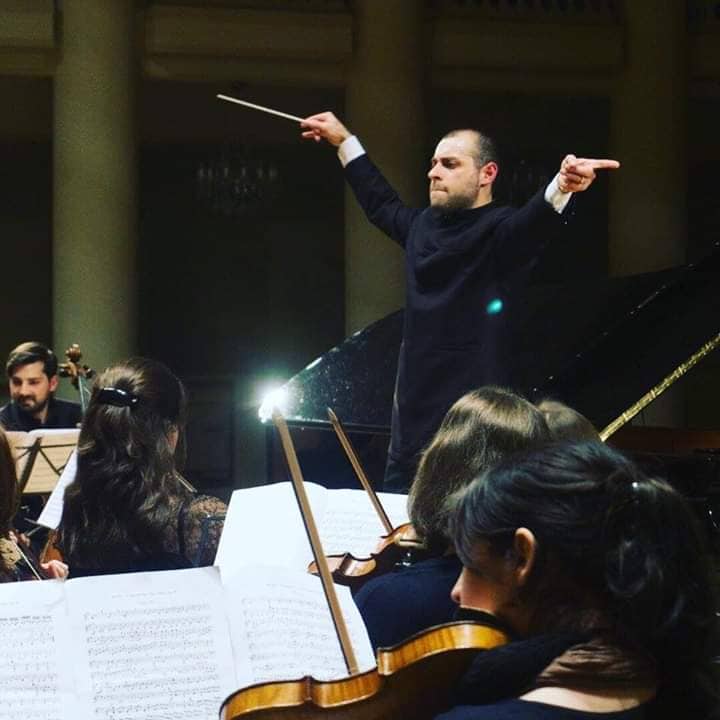 In 1998-2004 Giorgi studied  at the Zurab Anjaparidze Third Musical School. After graduation  he continued to study at M.Balanchivadze Central Musical College.A year later he started to study at  Z.Paliashvili №1 Music School (called "ten-year school for talented students"), which he  graduated in 2009. In the same year he started to study at V.Sarajishvili Tbilisi State Conservaroire – the Faculty of Conducting. In 2015 he passed through a four-month internship for conducting orchestra at the Meliton Balanchivadze Kutaisi State Opera House.In 2010-2016 he studied at the V. Sarajishvili Tbilisi State Conservatoireon the Faculty of Choir Conducting.  In 2016, after graduating Master programs at V. Sarajishvili Tbilisi State Conservatoirehe departed in Italy, Bolognacity, where he learned a three-month certification approved course of orchestral conducting at the “Conservatorio Di Musica Giovan Battista Martini Bologna”.

Giorgi Revishvili is the winner of several regional competition, owner of diplomas and certificates of   Republican and Nominee competitions, participant of many festivals of Piano and Choral music. In 2013 as a pianist-concertmaster he participated in the Georgian culture days in Italy (Pisa and Florence) and in 2015 at the Georgian culture days in Turkey (Trabzon). In 2015 he became a Laureate of Chamber Music Competition, where he became first prize winner and the title of best concert master. In 2015-2016 years he became the winner of Niko Sulkhanishvili Nominee Scholarship.

In 2017 Giorgi Revishvili participated in the Music International Summer Academy ("MISA") as a concertmaister and was invited to the MISA-2018 project as a conductor.
In January 2018 he has successfully demonstrated a Youth Simphony Orchestra in various regions of Georgia with "MISA"-s soloists.

In 2018 George became the winner of the first international competition "MISA Grand Prix", and was invited to the New York City to play Mozart Piano concerto with the Symphony Orchestra.